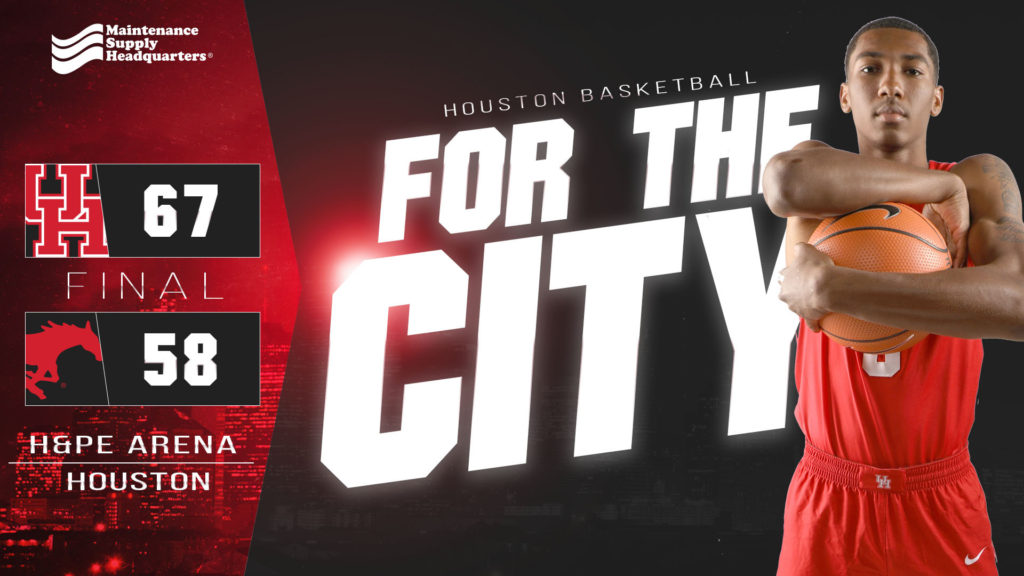 HOUSTON – University of Houston sophomore guard Armoni Brooks led all players with 23 points and 10 rebounds for the first double-double of his career, and the Cougars rallied late to take a 67-58 win over SMU inside H&PE Arena on Thursday in a game presented by Maintenance Supply Headquarters.

The Cougars, who improved to 18-5 overall and 8-3 in American Athletic Conference play, closed the game on a 17-1 run during the final six minutes to win for the fourth time in the last five games.

The game was tied at 50-50 midway through the second half before the Mustangs scored seven straight points over the next 3:51 and grabbed a 57-50 lead following a pair of free throws from Akoy Agau. Fortunately, the Mustangs would score only one more point the rest of the way.

Junior guard Corey Davis Jr. and senior guard Wes Van Beck moved the Cougars to within a point at 57-56 with back-to-back 3-pointers. After a missed SMU jumper, senior guard Rob Gray drove the basket and was fouled to give the Cougars the lead for good with 3:19 remaining.

Agau drained 1-of-2 free throws with 2:41 left to move SMU to within 61-58. The Mustangs forced a Houston missed shot, but senior forward Devin Davis swooped in and tipped the offensive rebound in to give Houston a 63-58 lead.

Brooks led the Houston charge with 15 points on 5-of-6 shooting from the 3-point line in the first half and became the third Cougar this season to record a double-double, joining Devin Davis and freshman forward Fabian White Jr.

After being held scoreless in the first half, Gray posted 15 points in the final 20 minutes and added a game-high seven assists. It was his eighth straight game with 4+ assists.

Corey Davis Jr. finished with 10 points, six rebounds and four assists. With two treys, he recorded his 19th straight game with at least one trey, breaking out of a tie with current Cleveland Cavaliers Assistant Coach Damon Jones for the 10th-longest streak in Houston single-season history.

SMU guard Jahmal McMurray led the Mustangs with 17 points and four 3-pointers. Agau came off the bench to total 13 points with a team-high seven rebounds, while William Douglas finished with 11 points, three rebounds and a pair of assists.